The average value of Saskatchewan farmland increased 7.5 per cent in 2016, following gains of 9.4 per cent in 2015 and 18.7 per cent in 2014. Values in the province have continued to rise since 2002.Provincially, there was strong demand and sales activity, including opportunities for producers to purchase leased land from the province. However, not all areas of the province saw increases in land prices. In fact, some rural municipalities saw land prices trending downward, while other areas remained stable. Adverse weather conditions throughout the growing season appeared to depress prices, but not necessarily temper demand. The southwest corner of the province had steady demand and values increased in that area by an average of 16.6 per cent, representing the highest increase in the province. Although there were challenges with the lentil harvest, the resulting yields and quality ended up being better than expected. Northwest part of the province continued to see strong demand and increased prices throughout the year, resulting in a 10.3 per cent increase in farmland values. Areas with larger farm operations continued to compete for land that came up for sale, causing land values to increase. 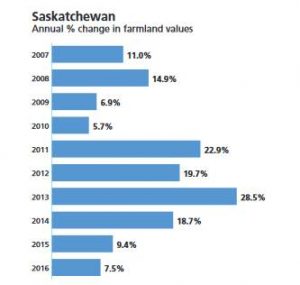 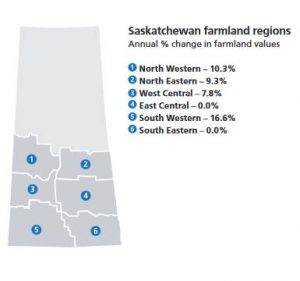